Home / Resources for Patients / WHAT ARE THE 7 STAGES OF DEMENTIA? 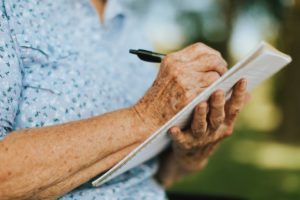 Dementia is a disease that affects millions of Americans. There are several types of dementia that we know of, including Alzheimer’s Disease and Lewy Body Dementia.

While forms of dementia vary in symptoms and severity, the Global Deterioration Scale aids in identifying the typical progression.

If you or someone you know may be in the early stages of dementia, here’s what you need to know about its seven stages:

Stage One: No Cognitive Decline

Stage one is entirely undetectable to the patient, loved ones, and physicians. At this stage, individuals do not experience or present with any cognitive decline.

Stage two may bring subtle changes in the individual, such as mild forgetfulness. These instances may include forgetting names or having trouble locating familiar objects. In the second stage of dementia, it’s difficult or impossible to notice these minor symptoms, and a diagnosis is not yet able to be reached.

Stage three involves mild cognitive decline. The symptoms may become more noticeable to loved ones of the individual in stage three dementia, and a diagnosis may be near. This stage often includes mild memory loss, out of character forgetfulness, and a slightly decreased ability to concentrate.

Many people living with dementia are officially diagnosed during stage four, which is when physicians are able to pinpoint cognitive decline with an exam. At this point, the patient will likely present symptoms such as life-disrupting forgetfulness and out-of-character difficulty performing daily responsibilities. It may become more challenging for those with stage four dementia to manage finances or navigate to new locations.

Stage five is marked by moderately severe cognitive decline. Individuals in this stage often have notable memory loss and begin to struggle with daily activities. Significant details such as address or phone number may be difficult to recall, and those with stage five dementia will likely need assistance with tasks such as meal preparation and bathing.

Individuals in stage six need a high level of support to live comfortably. Memory loss tends to be significant, and many in stage six dementia are only able to recall memories of early life. Incontinence is common in this stage, and many patients also begin to lose their ability to speak. A change in personality may occur during this time period, which lasts an average of 2.5 years.

Stage seven typically lasts for 1.5 to 2.5 years and is characterized by very severe cognitive decline. Patients in stage seven lose their ability to communicate, and are often unable to walk. Individuals in late stage dementia require extensive assistance with life’s activities, and often need round the clock support.